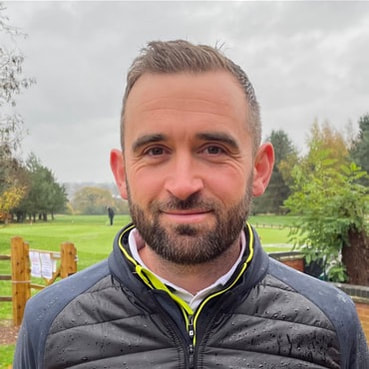 Kieran is the Head PGA Professional at Brampton Heath Golf Centre in Northamptonshire where he coaches golfers of all abilities.  Coaching over  1000 golfers per year Kieran introduces many new golfers to the game as well as improving the skills of many juniors and more established players.

Kieran is a Northamptonshire County coach, as well as a coach for the UK's Armed Forces skills courses.  Kieran was also one of only 24 coaches nationally chosen to coach at the Open at Royal Birkdale in 2017.

​He makes learning fun and enjoyable, and will always strive to get you hitting the ball better, further and straighter as quickly as possible.  After all you enjoy golf more when you play well!

As an amateur golfer Kieran was a member at Hinckley Golf Club where he reached a handicap of plus 2 and still holds the course record of 64 (7 Under Par).  He represented Wales at a senior level and the Leicestershire County 1st team on over 30 occasions before turning professional in 2009.

With a degree in Sport Science and Psychology from Cardiff University and Professional Golf Studies from Birmingham University Kieran now works with golfers of all ages and abilities to improve their game.  His knowledge of the body and how it works is a huge influence on his coaching, treating each pupil as an 'individual' rather than teaching one method to all golfers.

As well as receiving a distinction in his PGA Custom Fitting and equipment repair exams, he has also received recognition from PING and Callaway as one of their recognised product specialists.